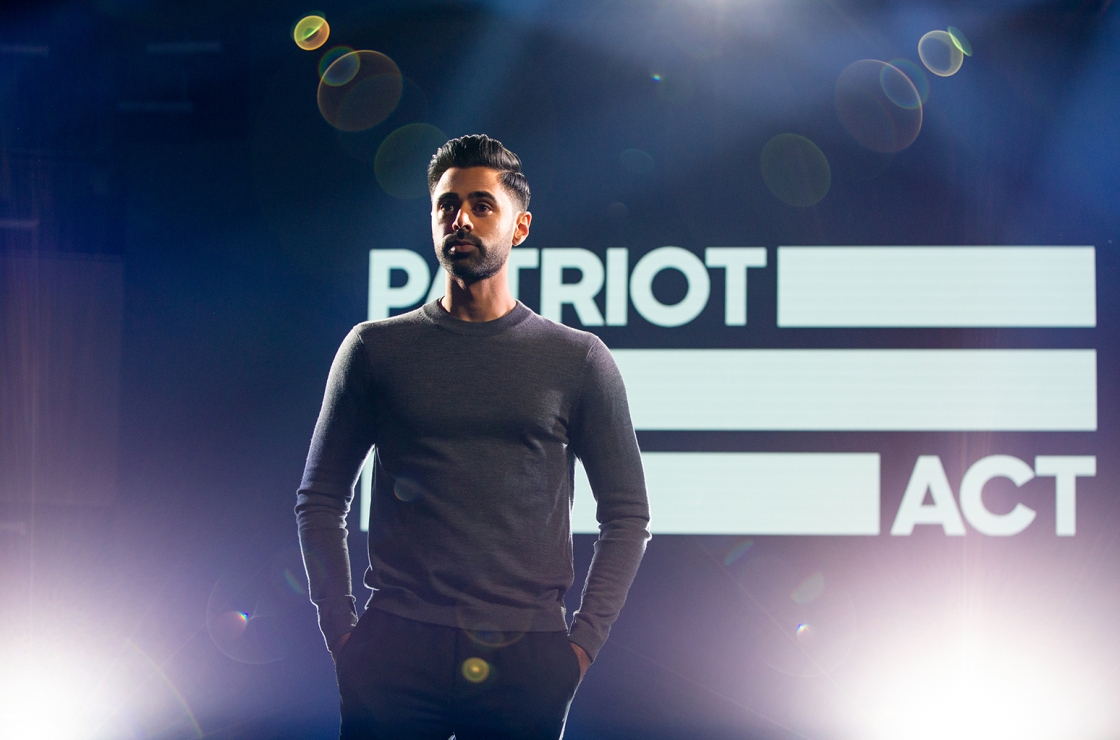 Homecoming King was Hasan Minhaj’s career catalyst. The Netflix special brought Brown people together like no other piece of pop culture. Talking about his family’s immigration, adapting to living as an Indian American, the ups and downs of being a teenager, Hasan Minhaj connected to people on so many different levels. I watched the special for the first time, the night it came out. I found it hilarious and heart-warming and in some instances, I (surprise, surprise) cried.

With his new weekly talk show, Patriot Act, Minhaj is taking the medium in a whole new direction. No more is there a desk for which the host to hide behind in his stuffy suit. No more is his name Jimmy or James. No more are there celebrity guests promoting their upcoming features with random anecdotes. Hasan is here to teach you something important and you’d better listen.

The season starts with two pertinent topics. In the first episode, Minhaj discusses the importance of Affirmative Action to Asian American college students and how the Anti-Affirmative Action campaigns are not just a means for unhappy parents to questions why their kid didn’t get into Ivy League colleges, but also a way for white people to push forward their agenda and fragment the Asian American community. By incorporating history, personal experience, news clips, Minhaj argues that removing Affirmative Actions is ultimately more harmful than anything.

The second episode was my favorite, though. Minhaj scrutinizes Saudi Arabia in a way that I haven’t seen in mainstream media before. He highlights the human rights crisis of Yemen that Saudi instigated and has refused to fix. He examines the inordinate amounts of money the country is funneling into the Silicon Valley as well as weapons. Most importantly, he criticizes the assumption that Muslims align with Saudi. Minhaj makes it clear: “Saudi Arabia is only 2% of the Muslim population but whenever Saudi does something wrong, Muslims around the world have to deal with the consequences.” The juxtaposition of Islam’s pilgrimage sites and holiest places being in a country that abuses its power and wealth isn’t shocking to Muslims. It’s what we’ve been saying all along. Hearing it on television means something else. The anger and frustration in his eyes isn’t an act—it’s the way so many Muslims feel about the distortion and corruption of our religious beliefs and values.

In the second part of the episode, Minhaj brings about what I think is my favorite discussion of representation yet. Indians can be terrible, horrible people, just like everyone else. This is something that I’ve thought about often, that representation doesn’t need to be of good, wholesome people—it has to be human. It has to show both the strengths and the flaws, the good and the bad. Without even once mentioning the Model Minority Myth, Minhaj dismantles it and says “For once, Indians don’t have to be doctors, or pharmacists or accountants—we can be so much more. We can finally be as bad as we want to be!” The following sketch of Indian kids sharing their aspirations to be bad was priceless. The best line: “My bindi is going to be a prison tattoo!”.

After watching the goofy antics of Hasan Minhaj’s comedy troupe Goatface Comedy on YouTube throughout high school and clips of The Daily Show, Patriot Act reminded me how representation truly matters. Seeing an Indian Muslim American on TV garnering this kind of acclaim  and bringing phrases like log kya kahenge and discussions of lotas into the mainstream means more than many people can imagine.

(Sidenote: I lost my shit during the lota discussion of episode 2. Never have I laughed harder than watching Hasan Minhaj explaining lotas to a mostly brown audience but knowing his non-Desi constituency would be confused. #bootyhealthtips)

When I lived in America as a little kid, I refused to wear Indian clothes outside of family parties. I was embarrassed when my friends were over and my house smelled like bhagar. I laughed at Desi accents because I was too uncomfortable to do anything else. Looking back, I regret that my insecurities about being Indian manifested in these ways. But now, things are different. Moving to Malaysia as a tween, a country that thrives because of its multiculturalism and diversity, helped me understand the value of my intersecting identities. Stalls of Indian, Malay and Chinese (and more!) food line the streets, smells of spices and meat wafting through the air. Mosques are down the street from temples and churches. People in hijabs, saris, sarongs, baju kurungs, and everything in between walk through the city. Living in Kuala Lumpur helped me understand that I didn’t need to hierarchize or hide certain parts of myself. I am allowed to live with my intersections because everyone has their own complexities and nuances.

I’ve recognized this as a privilege since moving back to the US for college. Growing up in America is very different experience. The country’s foundations of white supremacy alter the way you see yourself and that takes time to recognize and move on from. However, seeing more people like Hasan Minhaj, Mindy Kaling and Riz Ahmed on screen as well as behind the scenes will make all the difference in taking those steps forward.

Here are some Brown folks and works you can support that I’ve found to be pretty great:

–Surina and Mel, an upcoming TV series about two Brown girls in NYC

What does representation mean to you? Who are some of your favorite people that you feel represent you and your identities? What are your thoughts on Patriot Act? Share your thoughts—I want to hear ‘em!

noun
1.  a feeling or deep pleasure or satisfaction derived from one’s own achievements, the achievements of those with whom one is closely associated, or from qualities or possessions that are widely admired

2.  consciousness of one’s own dignity